So it’s been quite some time since the beginning of this vanlife journey, from quiet fantasies at work and long nights spent glossing over the vanlife instagram tags the time to finally begin drafting is here. As I’m not a fully licensed driver until April 2021 I was going to wait until the new year to start plans but well here we are!

Step 1: Learning all about Power 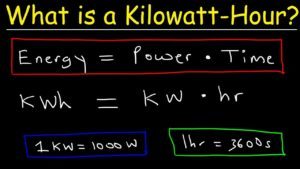 There are many steps to putting my van together, but as I’m a transhumanist it’s only suiting that the first concern of mine is electricity in a van. Whilst the freedom and mobility of a van is extremely appealing to me the major off-put is of course being unplugged. As a result my personal main priority is ensuring I can maintain the same level of connectivity I currently do even when out in the remote regions of the world.

To start I need to do a rough estimation of my power consumption on a monthly basis, which thanks to my handy electrical bill I know my exact usage. In the month of July I used 220kWh @ .0589/kWh. The first thing to be taken into consideration then is what part of this consists of things that won’t exist in a van to which I think it would be safe to say I’d draw at a bare minimum 10% less than that on a monthly basis if I was mobile.

This means over the course of one month I need to be able to store a total of 200kWh worth of electricity. Remembering back to our articles on power banks most batteries we covered definitely wouldn’t be large enough for this, leaving us a little stuck on how to reach the total power needed. Of course a little bit of science will solve that problem, reasonably and personally I’d like to go at the very least 1 week without recharging my batteries. As a result that will mean a nominal portion of my storage space will be taken up by well.. Batteries!

Step 2: How many Batteries is too little?

The math of course makes things a bit easier in determining which batteries and how many I’ll need, alongside durability & reliability of the batteries themselves. I’d skimp on details for all other aspects of my home but considering I’ll likely be literally sleeping above the batterybox. There is absolutely 0 room for error as it’s my ass that’ll be on fire if I cheap out, thus I’ll be sticking only to power equipment that’s rated for military usage.

Yup you heard that right, the military has some of the absolute highest standards for equipment reliability and durability compared to the civilian world as a result of course anything that the army says is okay to send the troops into combat with is likely going to be the absolute most cost-effective without sacrificing on performance! As we need to store 50kWh and most batteries are rated in Ah we need to perform a quick conversion I end up with 4166.7 Which we’ll round up to an even 4200 Ah as my power storage requirement.

They’re made with Military Grade components and are “Maintenance-free”, which usually would be a claim that would be a bit much but from what I’ve read and seen in videos anyone that’s opted for them has been EXTREMELY satisfied and won’t go back to basic made in china ones.

The Catch? They’re expensive at more than double the cost of basic batteries of a similar variety. However this is the safest and most efficient way to power my home and in my eyes is an absolute must have with safety taken into consideration it’s a small price to pay to live.

The super late game maybe in a decade or so would be to buy a discarded Tesla, rip out it’s battery and rig that to my power network enabling charging at tesla ports & EXTREME levels of storage… One day hehe! 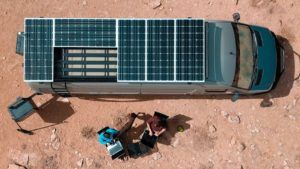 Next up I’ve got to work out how I’ll be keeping these batteries at full capacity, there are plenty of methods to charging but as I plan on being primarily an Urban Vanlifer I’ll be relying on Electric vehicle charging stations. There are even methods for converting charge ports for tesla chargers which I will delve into later but for now, the important note is that I’ll be relying on a mix of Solar & Charging from stations.

I’ll probably do up a permanent piece on Solar Wattage and efficiency at some point down the road when I get to the actual solar components, but for now, some quick calculations will make things easy. A typical 600W solar panel can be relied upon in good sun conditions to generate at least 2kWh a day which is 25% more then I consume at my house on a daily basis!

Considering that setup will cost no more then 1000$ to install stealth’d on top of my roof it’s essentially our key to unlimited power! Of course, you can’t absolutely rely on the sun at all times, so I’ll be making sure to create a full conversion method for drawing power via electrical vehicle charging stations, and in the worst-case scenario a regular ol’ wall panel.

So now that I’ve found my power storage, power generation method & backup solution this wraps up the first part in my Van Plan series. Next up I’ll be covering how this will all work electrically in the van itself before we move on to an out of van test build prior to installation! The next piece is going to be quite complicated so if you’re new to electrical work you might want to jump over to our basic guide on electrical work.

NEXT ARTICLE: The Van Plan ELECTRICAL – Part 2 What to do with this Power?